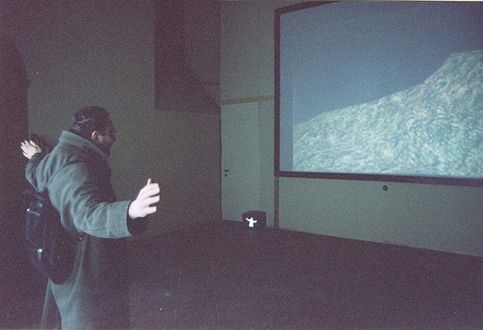 Building off of the technology used for "Videoplace," "Small Planet" created a virtual Earth-like planet that has been scaled down to allow for quicker circumnavigation. Like "Videoplace" there are participants in two separate rooms, interacting with the media projected onto their own screen. Participants can fly around the planet by holding their arms out like a child pretending to fly and can control altitude and direction by moving their arms and body around. The participants exist in the same virtual plane, too, and can interact with the virtual avatar of each other in the virtual planet.

According to the taxonomy, the media here is an actor, mirror, and set.