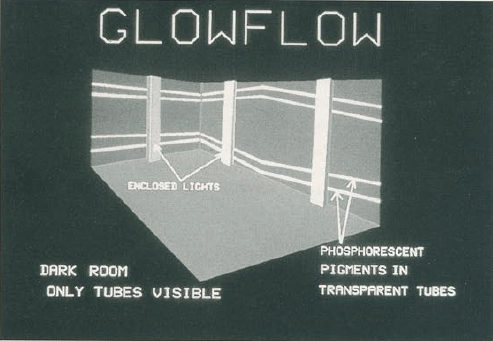 "Glowflow" consisted of a darkened room with tubes containing phosphorescent pigment. The floor was covered in sensors that would respond to movement of the participants by lighting up different tubes or by changing the sounds/origin of the sound generated by a synthesizer. Visually, Krueger considered "Glowflow" a success, but felt that it fell short of a true interactive environment because the participants were unaware of what specifically they were doing to generate each reaction.

Krueger said that participants assumed that striking the walls of the installation would trigger or change the sounds, and they would continue doing this even after it should have been obvious that what they were doing was not the correct action. This was seen as a failure in the terms of interactivity because there wasn't really a dialog happening between man and machine.

In the terms of our taxonomy, the media here would have to be a mirror. It only reacted to the movements of the participants across the floor and had no choice but to mirror them. It could also be said that the media served to create the environment, but again it was an environment created by direct correlation to the movements of the participants within.