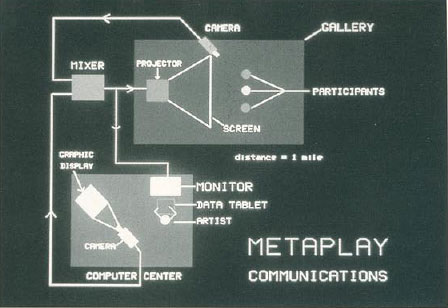 "Metaplay" consisted of two rooms connected by a closed-circuit video feed. Krueger sat in one room as the artist, and when participants entered the gallery he could see them on his screen and would interact with them by drawing on a tablet. The participants could also see themselves projected onto the media screen in the gallery. The focus of "Metaplay" was on interaction between the participants and the media, and the artist and the media in their respective spaces.

One of the things that make Krueger stand out in this period is that he emphasized the importance of the participants knowing exactly how they were supposed to interact with his exhibits and what reaction their actions would illicit.